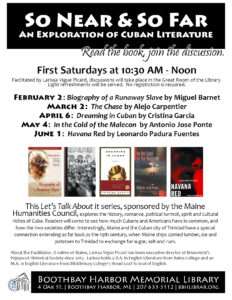 So Near & So Far: An Exploration of Cuban Literature

Explore Cuban culture and history through the voices of talented Cuban authors. The writing in this series is lyrical, compelling, and poetic.

So Near and So Far: Cuba Through Its Literature

A Let’s Talk About It Book Discussion Series

Cuba is intriguing, it’s mysterious, it’s rich in cultural tradition, it’s just 90 miles off the tip of Florida, and…. it’s forbidden. The five books of the series explore the history, romance, political turmoil, spirit and cultural riches of Cuba. Readers will come to see how much Cubans and Americans have in common, and how the two societies differ. Cuba and the United States are connected in so many ways. There are family ties, historical links, geographic closeness, and a shared love of freedom. Interestingly, Maine and the Cuban city of Trinidad have a special connection extending as far back as the 19th century, when Maine ships carried lumber, ice and potatoes to Trinidad to exchange for sugar, salt and rum. Granite blocks used as ballast in the ships were left in Trinidad, and the streets in Trinidad are paved with Maine granite. Maine’s trade with Trinidad was so important that the state established a consular post there, and there’s even more, now that the State of Maine is engaged in commerce with the island! Here’s a brief summary of the books in the series:

Biography of a Runaway Slave by Miguel Barnet
In this remarkable testimony, Cuban novelist and anthropologist Miguel Barnet presents the narrative of 105-year-old Esteban Montejo, who lived as a slave in the sugar fields, as a fugitive in the wilderness, and as a soldier in the Cuban War of Independence, and who ultimately lived to see the Cuban revolution’s promise of education and medical care, including a nursing home where he was being interviewed. This book was chosen for the series because the runaway slave’s life story is uniquely interesting since introduces the reader to multidimensional cultural details about slavery and slave populations erased in general discussions of slavery. Furthermore, it is one of the few accounts that exist of Latin American slavery from the point of view of the slaves.

In the Cold of the Malecon by Antonio Jose Ponte
In these short stories, set in 1990s Cuba during the hard times following the collapse of the Soviet Union, people go to work only to find that their jobs no longer exist. They joke and tell stories from the past, live aimlessly, uncertain about what the future holds. While living in this state of suspension, Ponte’s dynamic characters create their own startling worlds. This book was selected because it departs from both the utopian-political and the romantic-baroque styles of past Cuban literature, and deftly sketches a picture of a contemporary Cuba that is very different from the stereotype of Caribbean life, full of music and dance and colorful celebration.

The Chase by Alejo Carpentier
A thrilling tale written in 1958, told against the backdrop of Havana in the era of Batista’s violent tyranny. It tells the story of how two men (a student on the run and a ticket seller at a concert hall) find their lives and fates intertwined. Attention to details that are constant variants on preceding detail build the tension to a stunning climax. An anonymous student flees a team of shadowy, relentless political assassins, and ultimately takes refuge in a symphony hall during a performance of Beethoven’s Eroica Symphony. This nightmarish novella does not tell a story so much as map the secret political infrastructure of cities, governments, churches, music, and bodies. It was chosen for the series due to its extraordinary ability to convey the claustrophobia and frustrations under the Batista regime and as an allegory for any tyrannical regime.

Dreaming in Cuban by Christina Garcia
A superb novel that delves into the themes of family, history, culture, and self-definition. A patchwork of incident, memory, letters, dreams and visions provides glimpses of a Cuban family at home and in exile in the ’70’s and ’80’s. This book was chosen because it captures the hard lives of those in Cuba and of those who are dedicated to the ideals of the revolution, yet also presents the vivid picture of those who have left Cuba and carry a profound bitterness against the revolution. Cristina Garcia presents the lives of all these people, their hardships, triumphs, doubts, personal weaknesses and strengths without much comment. Her considerable ability as a writer seems to be in creating well-rounded believable characters who reveal so much of the times and situations in which history has thrust them.

Havana Red by Leonardo Padura Fuentes
This magnificent innovative detective story is haunted by the tragic story and passion of its characters. A best seller in Cuba today, it is the first of a series of four books featuring inspector Mario Conde. A young man in a beautiful red dress is found strangled in a Havana park. Conde’s investigation into a violent murder exposes a stifling, corrupt society, a Cuban reality where nothing is what it seems. A dark and fascinating world of men and women born in the revolution who live without dreaming of exile and seek their identity in the midst of disaster. A true page-turner!