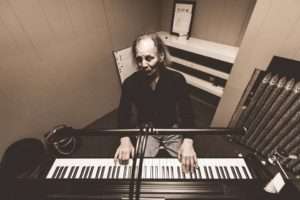 ‘Ragtime’ Jack Radcliffe has been performing for more than 45 years. He is a master of traditional country blues and stride piano, and a powerful singer/songwriter, as well. He also accompanies himself on the guitar and harmonicas and has lately added the fiddle to his arsenal of musical weapons.

He was a fixture on the coffeehouse circuit in the late ’60s and early ’70s. His major early musical partnership was with Georgia country blues guitarist and singer Larry Johnson, in 1968 -1970. His band ‘The New Viper Revue’ pushed the genre envelopes of blues, folk, rock ‘n’ roll and jazz from 1972 -1976. Jack resumed his solo career in 1977, then teamed up with reed player Al Oliveira in 1983.

He retired from the music business, except for occasional local engagements, in 1987 to raise his sons. Now he’s back full-time in the music, directing Wepecket’s operations, producing other artists’ recordings and touring with the Rolling Roots Revue.

Jack was inducted into the Old Time Country Music Hall of Fame in August, 2014.