The Doctrine of Christian Discovery and Domination 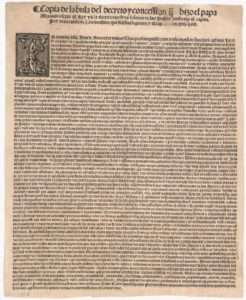 When Christopher Columbus first set foot on the white sands of Guanahani island, he performed a ceremony to “take possession” of the land for the king and queen of Spain, acting under the international laws of Western Christendom. Although the story of Columbus’ “discovery” has taken on mythological proportions in most of the Western world, few people are aware that his act of “possession” was based on a religious doctrine now known in history as the Doctrine of Discovery. Even fewer people realize that today – five centuries later – the United States government still uses this archaic Judeo-Christian doctrine to deny the rights of Native American Indians. (Steve Newcomb, Five Hundred Years of Injustice: The Legacy of Fifteenth Century Religious Prejudice, 1992)

Join John Dieffenbacher-Krall, Chair of the Episcopal Committee on Indian Relations and former executive director of the Maine Indian Tribal-State Commission, for a talk on the Doctrine of Christian Discovery and Domination, its effects on theWabanaki and other Original Peoples worldwide, and a reevaluation of Columbus’ voyages to the Caribbean.. The Doctrine has formed the legal basis for taking of Wabanaki land and most lands inhabited by the Original Peoples of the Americas (and Africa, Asia, Australia, and New Zealand). In 2007 the United Nations condemned the Doctrine of Discovery in the preamble to the Declaration on the Rights of Indigenous Peoples. Every member of the UN was in support, except Australia, Canada, New Zealand, and the United States. Join us to explore this facet of Maine and American history and the current effects of a medieval religious concept serving as the basis for US Federal Indian Law and international laws.

About the presenter:
John Dieffenbacher-Krall has devoted his adult life to activism, community organizing, and social change working for environmental, multi-issue, and intergovernmental groups in three states in addition to his considerable volunteer service. For 12 ½ years, Mr. Dieffenbacher-Krall held the position of Executive Director for the Maine Indian Tribal-State Commission (MITSC). In his private volunteer life, John chairs the Episcopal Diocese of Maine Committee on Indian Relations, a position he has held since his appointment by the Right Reverend Stephen Lane on February 15, 2017.

His past work to advance a more just relationship between Original Peoples and settlers includes a resolution he co-wrote that passed at the October 2007 Episcopal Diocese of Maine Convention calling for the renunciation of the Doctrine of Christian Discovery, and he was the principal co-author of Resolution D035, Repudiate the Doctrine of Discovery, adopted at the Episcopal Church’s General Convention held in July 2009. Mr. Dieffenbacher-Krall has also preached in several churches spanning five denominations in Maine and New York State about the Doctrine of Discovery along with giving a number of public talks on the subject. John was the official representative of the Diocese of Maine at the UN Permanent Forum on Indigenous Issues in 2012. During the two-week gathering, he drafted and delivered to the body on May 9 the “Intervention of the Episcopal Church and the Anglican Church of Canada Offering Suggested Actions on the Doctrine of Discovery and Domination.” On May 30, 2019, he gave a talk titled “The Doctrine of Christian Discovery and Domination: How It Has Impacted the State of Maine Pre- and Post-Statehood” during the Maine Statehood and Bicentennial Conference hosted at the University of Maine.