Skip to content
There will be no Story Time this Friday...please come to Summer Reading Wrap-Up from 1:00-4:00 p.m. with Lindsay and Her Puppet Pals at 2:00! 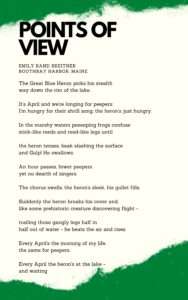 The Great Blue Heron picks his stealth
way down the rim of the lake.

the heron tenses, beak slashing the surface
and Gulp! He swallows.

An hour passes, fewer peepers
yet no dearth of singers.

The chorus swells, the heron’s sleek, his gullet fills.

Suddenly the heron breaks his cover and,
like some prehistoric creature discovering flight –

trailing those gangly legs half in
half out of water – he beats the air and rises.

Every April’s the morning of my life,
the same for peepers.

Every April the heron’s at the lake –
and waiting
_
Return to POETRY NOW! Gallery