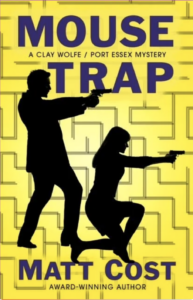 Join us on the library lawn to hear Maine author Matt Cost discuss the latest book in his Clay Wolfe/Port Essex series.

Mouse Trap book description: When Clay Wolfe is hired to find who tried to steal a mouse, he thought it was akin to a fireman getting a cat out of a tree. It wasn’t.

“Sometimes bad genes need to be stamped out and good ones need to be fostered,” Bridget Engel said. “There’s really no difference between mice and human beings when it comes to genes.” She wore a gray suit, and her blond hair was cut short in the style that Hillary Clinton had made popular.

When Clay Wolfe rekindles an old romance, the summer is looking bright. It wasn’t.

He woke in the middle of the night, gathered his things, and slipped away. After Clay left, Victoria rose from the bed and went into the bathroom, carefully removed the condom from the Kleenex it was wrapped in and put it in a plastic baggie.

Who is the mysterious man who clubs Westy with a hammer and threatens the life of everybody Clay Wolfe holds dear?

Now, Clive Miller was a fixer. He took care of problems that arose. Once given a task, his hands weren’t tied, and he was well-paid for his troubles. There were two simple rules. Eliminate the problem. Don’t draw attention. 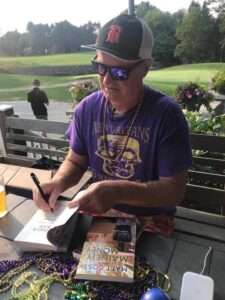 Matt Cost was a history major at Trinity College. He owned a mystery bookstore, a video store, and a gym, before serving a ten-year sentence as a junior high school teacher. In 2014 he was released and began writing. And that’s what he does. He writes histories and mysteries.