Meet Matt Cost (a 2021 Maine Humanities Council Read ME author) and hear about his latest book Wolfe Trap, as well as his Mainely Power series, featured for statewide summer reading! 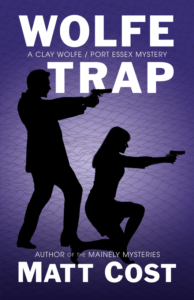 Wolfe Trap is Cost’s debut novel in a new series surrounding a PI, Clay Wolfe, in the fictional coastal town of Port Essex, Maine. Instead of a large white shark threatening the populace, it is heroin being smuggled through lobster traps that is endangering the town.

Clay Wolfe is a former Boston homicide detective who has left the police department to return home to Maine to care for his elderly grandfather and open a private detective agency. Haunted by being orphaned at an early age, and jaded by the corruption of the big city, Clay is happy to hit pause and investigate minor crimes.

“I want you to find the person who sold the drugs that killed my grandbaby.”

When he is hired to find out who sold the drugs that killed a six-month-old baby girl, he has no idea of the evil that he is going to uncover in the underbelly of his hometown.

Wolfe Trap is a thrilling ride set in a small Maine town with rich characters and shocking plot twists that will keep the reader rapt until the final pages.

About the author:  Matt Cost a.k.a. Matthew Langdon Cost

Over the years, Cost has owned a video store, a mystery bookstore, and a gym. He has also taught history and coached just about every sport imaginable.

During those years, since age eight actually, the true passion has been writing. I Am Cuba: Fidel Castro and the Cuban Revolution (Encircle Publications, March, 2020) was his first traditionally published novel.